Village People Macho Moves slot by Microgaming is an impossible amalgamation of all sorts of distinct characters that have come together in a world wackier than ever their own appearances. This Microgaming slot puts together an interesting selection of characters that will allow those among you who are more keen on a slightly barmier gameplay to appreciate this motley bunch of personages. 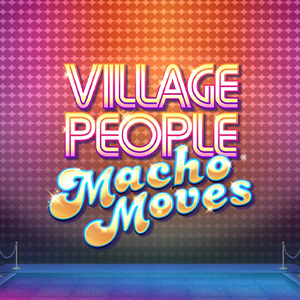 When it comes to the payouts, you can rest assured that Microgaming has taken a generous approach. You will stand to benefit from a 96% RTP in terms of payout potential, but while this number may seem a little too conservative, it’s always worth reminding yourself that the huge winning potential of the game comes from its characters. With just the right amount of luck, you will end up reaping the benefits of some excellent bonus free spins and wilds.

If you do get a Wild VP, you will notice that all 2 positions of the same reel will also turn VP, giving you even better prospects to win. This feature isn’t limited to a single reel and it can turn up on any active reel out in the game.

The game has a distinctly retro feel. The characters are indeed a motley bunch of rascals, and you will see a cowboy, a sailor, a man who can best be described as a gigolo, an officer of the law, a Native American, and out of all possibilities, an engineer. This is as flamboyant as the character get.

To put them in something of a stark contest with the setting, all of these characters will have to hang around at a disco club and try their moves. And while all of this doesn’t sound reassuring, the game itself feels and plays smoothly. We go in detail right here.

So, the first thing that will strike you immediately after you visit Village People is the wacky theme, but don’t let looks mislead you. The spins are quick and the payouts frequent. Microgaming has changed up their classic act a bit, offering a 6×3 grid, which will definitely feel refreshing after all those 5-reel slots out there.

After all, Microgaming is here to change how we experience slots and Village People Macho Moves is a slot game in this direction. With 15 paylines to enjoy and frequent payouts, this game is definitely a rookie-friendly choice. 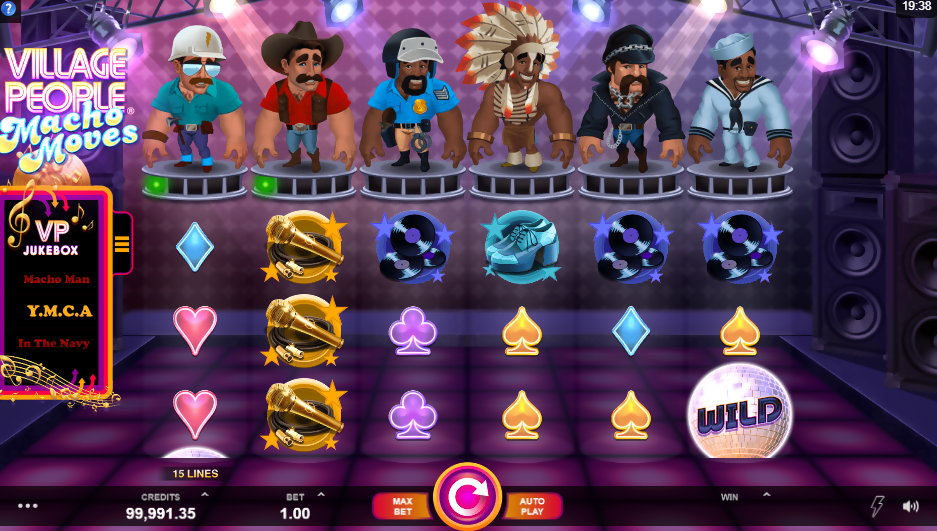 Plus, customising the size of the bet shouldn’t take too much effort at all. You can, in fact, bet between 0.20 and 25.00 coins per single spin. The reels themselves do spin quick, but if you want to kick things up a faster pace, you can always benefit from the “turbo feature” available in the bottom right corner.

The gameplay is additionally spiced up by the fact that each character has their own “macho move”. Feel like checking those out? Great, because we’ve been dying to show you!

If one of the game’s featured characters does show up on any of the reels you can be quite satisfied with the result. Each character brings some generous bonuses in one form or another. Here’s the entire breakdown of the bonus system as per the characters:

These distinct characters will make your gameplay memorable. So far as symbols go, you will run into both Wilds and VP Wilds. There is a special “VP Wilds Meter,” which promises to boost your profits even further if you stack enough wilds in it.

So far as great games go, Village People will definitely introduce players to a slightly altered experience that no other game currently has to offer.

The regular symbols in this game don’t pay too bad at all. You will have a whole bunch of them to choose from, including hearts, spades, sunglasses, dancing shoes, and all sorts of paraphernalia.

Microgaming is a remarkable name in the slot making a segment. In fact, the company takes a leading spot as a UK manufacturer of gambling products. The slot vertical is clearly the area in which Microgaming excels. Village People Macho Moves defies much of what the average user has grown accustomed to today. First, the grid changes the entire playing field and the individualised characters that bring specific goodies out of each independent reel is one more thing to admire Microgaming about.