Starburst is a very simple slot, yet it’s one of the most popular games in the Net Entertainment portfolio. The game has a futuristic space theme with different kinds of Jewels as game symbols. Still, the designers paid homage to the older classic slots by incorporating the Sevens and Bars symbols in the game. Coincidentally they are also the top paying symbols in Starburst. 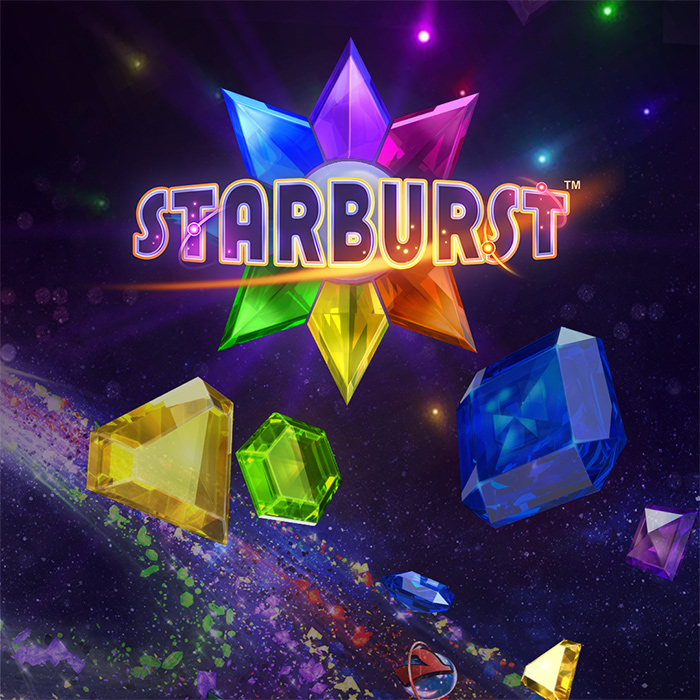 So, how did a simple slot like Starburst become so popular across online casinos? For this, we need a short history lesson on how Starburst helped make NetEnt the most popular software provider in the online gambling world today.

The payouts from the free spins weren’t too big, but they were enough to keep players interested. Soon NetEnt slots became incredibly popular among online players thanks to these promotions and NetEnt reached the throne of the online gambling industry. Now let’s get back to the game and what’s it all about.

The visual details in Starburst are quite appealing and you will surely be attracted to the game at first sight. The designers used modern animations in the slot which perfectly complement the gameplay and the theme. The background music is soothing and is a perfect addition to the wins on the reels. The colours used are very soft, making a great by Overall Starburst is a visually attractive slot, guaranteed to catch your attention.

The only special symbol in the game is the Wild. It can land on the 3 central reels, expanding to cover the entire reel and will replace for all other symbols. We can also mention the Bars and Sevens as the top paying symbols in the game, awarding a 250 and 120 coins payout.

Starburst is a 10 pay line slot with 5 reels and 3 rows. The slot is perfect for low rollers as the minimum bet size is set at only $0.10. But you can also play the slot on higher bets up to a maximum of $100 per spin. The bet size is easily adjusted by setting the Bet Level from 1 to 10 and the Coin Value from 0.01 to 1. After you set the bet you can use the Spin button or the Auto Play option to play the game.

Even though Starburst is a simple slot it still has an attractive set of features which make it interesting to play. The first detail you will notice is the Both Ways Win design. This feature allows for winning combinations to be formed both from left to right and right to left. This means that you need to land 3 or more matching adjacent symbols on at least the first 3 or the last 3 reels. Needless to say that this feature alone doubles the payout potential of the game and is the main reason for the frequent payouts which occur on the reels of Starburst.

Another thing to note about the game is that all of the game symbols can land stacked on the reels. This way players can get some nice payouts, even without the help of the Wilds. Still, the Wilds are the most attractive part of the game and can produce the biggest payouts.

As we mentioned earlier the Wild can land only on reels 2, 3 and 4. The Wild symbol is the Star and when it lands on the reel it will expand to cover the entire reel. When this happens the Wild will stay in position for one free re-spin. If another Wildlands during the re-spin both Wild Reels are held in place and you are awarded with another free re-spin. Thanks to this feature players can get the maximum 3 Wild Reels on the screen, accompanied with a free re-spin with all Wilds held in place. Needless to say, this is where the biggest payouts in the game can happen, especially if you manage to land a full stack of Bars or Sevens on the first and last reel.

Starburst is a low variance slot with an RTP value of 96.09%. The top payout in the game is set at 50,000 coins, which is a lot lower than on many other NetEnt slots. Still, the low variance of the game means that winning combinations on the reels land frequently, a fact which players can use in their advantage.

Serious NetEnt players have a saying which is somewhat true and amusing at the same time about this game. It goes “If you want to keep your current balance, play Starburst!” This is true in most cases and over time Starburst has become the personal preference among players playing with bonus funds, after they hit a big payout. Due to the low variance of the game and the frequent payouts you can easily play a massive number of spins without some serious impact on your balance. This is why Starburst is the top choice when it comes to wagering a big bonus amount.

The slot is suitable for playing on both low and higher bets and many times you can even increase your balance. This is especially true if you manage to land the elusive 3 Wilds on the reels and get high paying symbols on the first and last reel. But because of its relatively poor paytable Starburst is not a slot you want to play if you are aiming to win big. If a massive payout is your mission at some NetEnt casino you are better off playing some of their higher variance slots and hope for a good bonus round to land.