This is not Microgaming’s first rodeo in the desert. Yet, Magic of Sahara manages to stand out of any in-house or rival slot game title. With an awesome jackpot worth 100,000 coins, a variety of bonus features and great payouts, this title wins accolades and praises from fans and critics. Competitors also have a thing or two to learn from in the game, so without further ado, we step to exploring the entirety of this game.

It’s important to note that Magic of Sahara will run on any platform, including HTML5, Java, and Flash, which means that you can play on the go or from a PC at home. 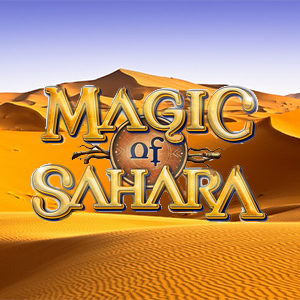 Magic of Sahara is an oasis for replenishing the fun of playing online slots. You are outside a desert city and have a chance to win great rewards just by placing the minimum a bet of at least 9p.

The overall aesthetics of Magic of Sahara are simple and focused on the theme of desert sorcery. You can easily lose yourself in the visually appealing magical world of the mysterious Sahara.

Nearly every menu is transparent, overlaying with the background and creating a better gaming environment overall. To save you the trouble of having multiple menus on your screen, Microgaming unites everything in compact menus. More about this now.

Magic of Sahara is designed in a way that offers exciting overall gameplay which will be worth every penny you spend. There is a wild and a scatter symbol both which makes the game immediately appealing to those among you who are looking for a slightly better profit.

Plus, there are free spins which you can trigger by either getting 3 Scatter Symbols on your paylines or loading up 25 tokens on the special magical chain that lines the actual playfield. If you haven’t used up your tokens, you will get a free spin for every 5 tokens you have on the chain when landing 3 Scatter Symbols.

Plus, you will get to multiply all your winnings during the free spins 2x, which is a very tempting offer all things considered.

Magic of Sahara’s gameplay is very intuitive and easy to get used to. A regular five-reel slot, the game allows you to adjust the size of each bet as you see fit. While most games usually display all details about your bets right on your screen, Microgaming has saved up on some of the space by moving everything into a separate section which pops up and where you can take your time adjusting payouts.

All you need to do to access the coin size menu is to click on the respective icons. From there you can stake as little as £0.09 and as much as £45. Each win will payout according to the original bet size.

The game is a concentrated package of fun as you get to play with only nine paylines which is a little unusual, but it gives you more focused gameplay instead. Most Microgaming games these days come with 243 or 1024 paylines, but who really has the ability to keep track of all of these?

Nine paylines is plenty, especially when you know that you can hit a 100,000-coin jackpot with nearly every spin. Let’s dig a little further into the game, its bonuses and special symbols!

Like every game, you will always want to know what the Return to Player (RTP) rates are. In this case, Magic of Sahara promises 95.25% in payouts, which is, let’s face it – a little below the industry’s average. Microgaming has taken an interesting approach to the game as well.

One the one hand they offer more frequent but smaller payouts. On the other, you could potentially big winnings and dozens of free spins which are bound to send your bankroll flying. The rather low minimum entry-level will allow you to experiment with the game as much as you wish.

Plus, Magic of Sahara can be played with any casino bonus, especially the ones where you need to make an actual deposit. No deposit and free spins offer also feature Magic of Sahara as an available title, but you will have to double-check with each casino.

Magic of Sahara is a well-balanced game that has a lot to offer to everyone who seeks to have a good time playing a great Egyptian-themed game. Even though you won’t explore the treasures of the pyramids, you will still be introduced to a game that appears to be an oasis of wealth amid the iGaming deserts.

The oriental pacey music will make you want to stick with this title a little while longer and while 95.25% RTP isn’t too bad, the potential to land 100,000 coins with a single spin is definitely quite tempting.