Jack and the Beanstalk is one of the most popular children tales in the world.

This story was the founding stone for the popular video slot Jack and the Beanstalk by Net Entertainment. The designers managed to take pretty much every detail from the tale and transfer it to the reels of the game. The slot has the potential for some massive payouts in the bonus round, which is the main reason why so many NetEnt fans decide to try their luck on this slot.

Jack and the beanstalk 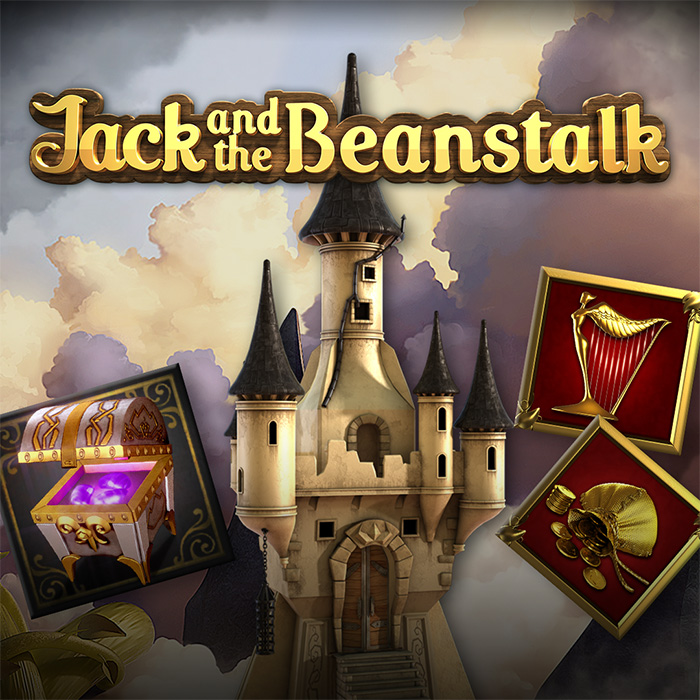 Jack and the beanstalk Features

Jack and the beanstalk Basics

Jack and the beanstalk

Recommended Casinos to Play Jack and the beanstalk

The story tells of a poor young boy who lived with his mother in a broken old home. One day having nothing more to eat his mother told Jack to take their cow to the market and sell it. But instead, Jack traded the cow for some magic beans which grew to the heavens in one night. Jack climbed the beanstalk only to find a beautiful castle occupied by a fearsome ogre. Jack stole his magic hen which lay 3 golden eggs a day, his money bags filled with gold coins and his harp which played beautiful music. As the giant chased Jack down the beanstalk the boy took his axe and cut the beanstalk sending the ogre to his death.

Visually Jack and the Beanstalk is a slot masterpiece. As most other NetEnt slots the game starts with a short video prelude, catching the story of the game. So in this video, we can see Jack running from the castle with the Hen, Money Bags and the Harp, while the two-headed giant is chasing him. The reels of the game are set in Jacks village with a peak of his crummy old house and his yard. As you can see everything is very well designed and you can already see a few modern animations on the screen. The animations complement the gameplay, but let’s not forget the background sounds. Every action on the reels has its own sound, making the gameplay complete and interesting.

The Wild symbol in the game is called a Walking Wild. It can land on all of the reels substituting for all of the game symbols, except for the Special Symbols. When the Wild lands on a reel it will award a free re-spin and move one position to the left until it leaves the reels. The re-spins continue for as long as there is a Wild symbol on the reels. The Wild will also triple any payout it contributes in. The Scatter symbol in the game is the Treasure Chest. It can land on all of the reels triggering the free spins bonus but doesn’t award any payouts. During the bonus round the other Special Symbols are the Key, the Money Bag, the Golden Hen and the Harp symbols.

Jack and the Beanstalk is a 20 pay line slot with a fixed number of pay lines. The game features 5 reels and 3 rows, where the bet size can go from $0.20 up to $100 per spin. In order to adjust the bet size, you will need to set the coin value from 0.01 to 0.50 and the bet level from 1 to 10. After that, you can use the Spin button to play the game or you can activate the Auto Play option.

The bonus round in the slot is triggered by landing at least 3 Treasure Chests anywhere on the reels. In return, you will be awarded 10 free spins. But every extra triggering Scatter will award you with 5 extra free spins. So if you trigger the bonus with the maximum 5 Scatters on the reels you will be rewarded with 20 free spins.

Everything in the bonus is about the Keys and the Wilds. The Key lands only on the last reel and every time you collect 3 keys you unlock one of the Wild symbols. So with 3 keys collected you unlock the Money Bags Wild, which comes as 2 stacked Wilds. With 6 Keys collected you unlock the Golden Hen Wild, which comes with 3 Stacked Wilds. If you collect all 9 keys you unlock the Harp Wild, which will expand and cover the entire reel it lands on. So, in theory, you can end up with a full screen of Wilds in the bonus round and a massive payout. Since the Wilds will triple the payouts and award a free re-spin while moving to the left you can end up with a big number of free spins in the feature and some incredible payouts.

Jack and the Beanstalk slot offers great payouts. The top paying symbol in the game is Jack, with a payout of 1,000 coins for landing 5 of them on a winning pay line. But the bonus feature in the game can produce payouts of up to 600,000 coins in a single spin.

Jack and the Beanstalk Slot – Verdict

Jack and the Beanstalk slot game is without a doubt a very popular slot coming from Net Entertainment. With its design and gameplay, we can easily compare it to Gonzo’s Quest, as both slots use similar animations. The game has a very attractive appearance and an easily recognizable game theme. Thanks to the theme many players decide to give the slot a try, without even knowing what the game has to offer. But once you start playing the game you can easily get hooked and Jack and the Beanstalk can become one of your favourite NetEnt slots.

In the end, that’s what it’s all about when it comes to playing online slots. The bonus round in Jack and the Beanstalk is designed to have the potential for massive payouts. You can easily get a full screen of Wilds in several spins with some luck on your side. Thanks to the Walking and Expanding Wilds in the bonus round Jack and the Beanstalk is capable of creating big payouts, even if you are playing on a small bet.