Gonzo’s Quest was the first 3D video slot which was launched by Net Entertainment. This game marked the comeback of this software provider on the world gambling scene after almost a decade from operating on the outskirts. The slot became an instant hit among online players. It had everything you could want. State of the art animations, fun gameplay, a rich paytable and the potential for massive payouts. Even today Gonzo’s Quest is among the most popular slots coming from NetEnt. 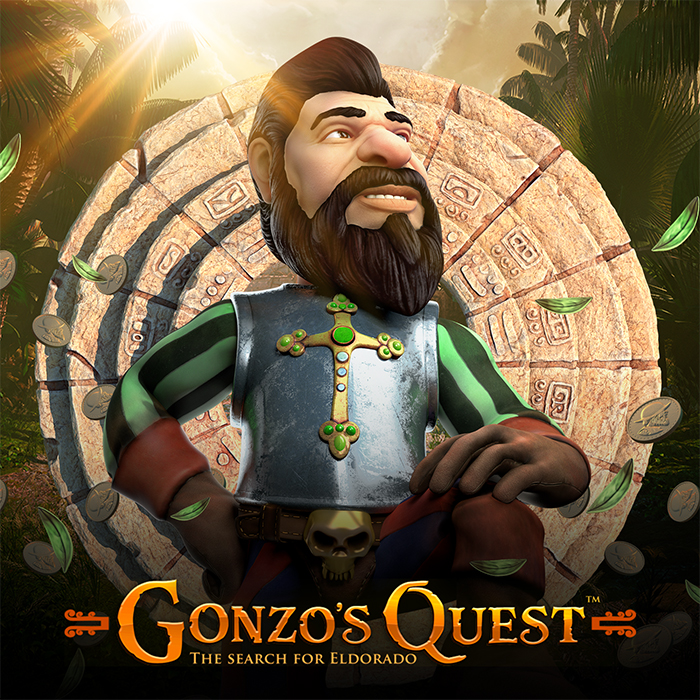 200% up to £5000 + 50 Bonus Spins
Play Now
<p”>Gonzo’s Quest is inspired by the Spanish conquistadores which were on a mission to find the new world and bring its riches back to Spain. The legendary golden city of El Dorado has lured many men into finding its towers of gold, but alas no one has found it so far. It’s said that Gonzo is inspired by Gonzalo Pizarro, who was a famous conquistador on a search for El Dorado. Gonzo’s Quest picturesquely shows all the endeavours he would have to overcome on this adventure.</p”>

The reels of the game are set deep in the Peruvian jungle. So, it’s only natural to see a dominant green colour on the reels of the game. The designers did an outstanding job with the visual details in the game. On the left side of the reels, you can see a state of the art 3D animation of Gonzo who is here to accompany you on your quest. The designers also added a variety of background sounds which perfectly fit the game theme and contribute to the gameplay.

The Wild symbol in Gonzo’s Quest is a mysterious rock with a Question sign on it. It can land on all of the reels and it will replace for all of the game symbols, including the Free Fall Scatter symbol. This means that the bonus round in the game can also be triggered by landing a combination of Wilds and Free Fall symbols.
On the other hand, the Scatter symbol in the slot is the Golden Mask Free Fall symbol. This symbol triggers the bonus round in the game but doesn’t come with any payouts attached.

Gonzo’s Quest is a 20 pay line slot, featuring 5 reels and 3 rows. The number of pay lines in the game is fixed and can’t be altered in any way. The bet size can range from $0.20 up to $200 per spin, depending on the casino you are playing at. In order to adjust the bet size in the game you will need to adjust the Coin Value from 0.01 to 1 and the Bet Level from 1 to 10. Once you set the bet size just hit the Spin button to start playing the game.

Gonzo’s Quest is a fun and attractive slot because it combines several bonus features in one. The first detail you will notice about the slot is the Avalanche feature. This feature allows for winning symbols to be removed from the reels and new symbols to land on top in order to fill in the empty spaces. This way you have a chance to get several winning spins in a row, for the price of one paid spin. But that’s not all.

On top of the reels, you will see multipliers which range from x1, x2, x3 to x5. The win multiplier is increased every time you get a consecutive winning spin in the Avalanche feature. So, you will need to land 4 winnings spins in a row in order to reach the top x5 win multiplier.

The bonus round in Gonzo’s Quest is triggered when you manage to land 3 or more Free Fall symbols on a winning pay line and on the first 3 adjacent reels. This awards you with 10 free spins where all payouts are tripled. But players can also land the Free Fall symbols on 2 winning pay lines. In this case, the number of free spins climbs to 20. You can also re-trigger the bonus during the feature which in return awards another extra 10 free spins. Since all payouts during the feature are tripled in size the win multipliers are now x3, x6, x9 and x15.This is where the big payout potential of the slot can be seen. The top paying symbol in the game awards a payout of 2,500 coins, meaning that on the top multiplier you can win 37,500 coins per spin.

As you can see Gonzo’s Quest is a slot which can pay big in the bonus round. The maximum promoted payout in the game is set at 225,000 coins, while the RTP is set at 96%.

So, what makes Gonzo’s Quest such an interesting and attractive slot? Well, pretty much everything. The designers managed to create a visual masterpiece by using state of the art animations and incorporating high details in every aspect of the game. The gameplay is fun thanks to the Avalanche feature where you can get many winning spins in a row, all for the price of one paid spin. The slot has the potential for medium wins during base play thanks to the win multipliers which can go as high as x5.

But the main reason why players love Gonzo’s Quest is the massive payouts it can produce in the bonus round. You can find many win videos from the slot online where players get several winning spins on the top x15 win multiplier. Needless to say that this translates to a big payout and that is the reason why Gonzo’s Quest will remain one of the most popular slots coming from Net Entertainment.

Gonzo’s Quest is without a doubt one of the best slots which were released by Net Entertainment. The high quality of work which was put into this slot clearly showed that NetEnt was serious about getting to the top of the world gambling scene. Sure enough a few years later the NetEnt slots, including Gonzo’s Quest, became dominant across online casinos.

Other Recommended Slots to Play