Dr Jekyll & Mr Hyde is a well-known tale. Dr Jekyll & Mr Hyde is used to point out the two opposite characters of a person. One shows the good while the other shows how sinister people can be. This gothic novella was first published in 1886 by Robert Louis Stevenson and ever since has found its way into movies, cartoons and even into great slot games. 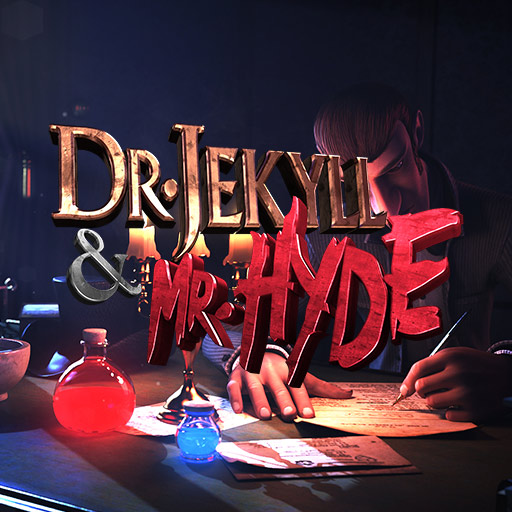 The tale was adapted by Betsoft Gaming in this outstanding slot. Dr Jekyll & Mr Hyde is one of their 3D slots, meaning that players will get to enjoy a number of beautiful animations while they spin the reels. Features-wise, the game has a lot to offer. The gameplay is fun and you can easily spend hours spinning the reels. The slot can also produce great payouts thanks to the rich paytable and the attractive bonus rounds.

Visually, the slot has a lot to offer, which is the case with most other 3D Betsoft slots. You will surely enjoy the gameplay and the background sounds which make up for an overall attractive video slot.

Enter the dark office where Dr Jekyll will greet you and stay by the reels as you play the game. From time to time he will move across the room to his desk and mix up some potions and serums. As you play the game you will also see a number of other 3D animations, including a few short movies about Dr Jekyll’s transformation into the evil Mr Hyde.

The slot comes with a number of Special Symbols which in return trigger their own features. The Dr Jekyll & Mr Hyde Logo symbol acts as a Wild symbol in the game, but only for the Dr Jekyll and Mr Hyde symbols. The rest of the Special Symbols are the Blue and Red Potion symbols. On their own, these symbols have no special functions, but in combination with other symbols, they trigger the corresponding bonus feature. More will be explained about this in the Bonus section below.

Dr Jekyll & Mr Hyde is a 30 pay line slot with 5 reels and 3 rows. Still, players can adjust the number of pay lines from 1 to 30. But like in all other slots it’s recommended to play the game with all pay lines active. The bet size in the slot can go from $0.30 to $150 per spin. To adjust the bet size players will need to set the Coin Value from 0.01 to 1 and the Bet Per Line from 1 to 5. After that, you can use the Spin button to play the game.

There are several bonus features which players can trigger while spinning the reels of Dr Jekyll & Mr Hyde. If the Red Potion symbol lands on reels 2 and 4 with a Dr Jekyll symbol adjacent on reel 3 the symbols on the reels will go crazy and move in new locations. At the same time, all of the Jekyll, Hyde and Logo symbols will turn to Wild Hyde symbols. Also, a special win will be awarded for the Wild Hyde.

If Mr Hyde lands on reel 3 and the Blue Potion symbol lands adjacent on reels 2 and 4 players will trigger the Special Bonus Bet. Here you are awarded a random win multiplier ranging from times 5 to times 20 of your bet size.

When you manage to land the Logo symbol on reel 3 accompanied by Mr Hyde on reels 2 and 4 the Frenzy Bonus feature is triggered. Here you will need to direct Mr Hyde to go left or right across the city streets and commit several robberies along the way. Just make sure to avoid the policeman or the bonus round will end.

When the Logo symbol lands on reel 3 and the Dr Jekyll symbols land on reels 2 and 4 the Potions Bonus is triggered. In this feature, you will need to find the correct ingredients as fast as you can in order to produce the most potent anti-monster serum. The maximum you can win in this feature is set at 160 times the total stake.

Dr Jekyll & Mr Hyde is a very popular video slot across Betsoft casinos. The game has a lot to offer in both visual details and bonus features. Players are sure to enjoy in the many 3D animations and short movies which can be found across the slot.

What makes the game appealing is the variety of bonus features it offers. Some of the features are base play bonuses which offer a small reward even as a top payout. Thankfully the free spins bonus can produce big payouts since players get an unlimited number of free spins. With some luck on your side, you can easily get a big number of free spins and a big payout on your account. Of course, you can also trigger some of the other features during the free spins bonus which can only add more payouts on top of your winnings.