Breakaway Deluxe is one of the freshly-minted Microgaming slot titles out there that will offer you excellent opportunities to win big and experience modern slot gameplay. The game was released on June 2019, making it one of the latest entrants in the slot field and with 243 paylines guaranteeing you some steady winning scenarios, you will want to be playing. Plus, the audio is created thoughtfully in a way that invites you to become part of the gameplay right away. 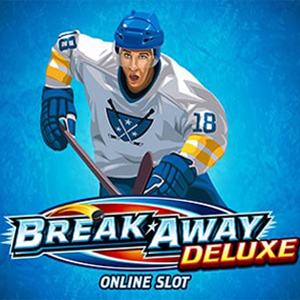 “Welcome to the game,” this is how Breakaway Deluxe welcomes all new entrants who have just crossed its threshold. The game has an interesting interface that is very intuitive and allows players to carry out any action they are keen on in no time. Whether you want to spin, switch on the auto-spin function or get into “turbo mode”, the right-hand-side menu will make any of these actions very simple.

So far as the colours and visuals go, Breakaway Deluxe is an interesting amalgamation of symbols that depict athletes and various terrains where popular sporting competitions take place. Microgaming has definitely created an interesting way of introducing the player to this slot title. While the game has been recently released, the player will catch that specific vintage feeling to it, which is great.

The first thing you need to know about Breakaway Deluxe is that it is a very customizable game that will let you play at your own pace and budget. You can choose between 18 and 88, which makes it even easier for budget players to play at a pace they feel fully comfortable with.

Speaking of budgets, there are some very easy ways to calibrate the size of your coins and the coins per line you want to be staking. If you want to do a quick bet, you can do that as well. The betting size ranges between £0.18 to 44, which is great for both the penny slot lovers and those who are of a little more high-rolling turn of mind.

By now you have also noticed that the game uses an interesting 5×5 grid, which is somewhat of an upgrade on the standard 5×3 layout. Does this give the player an inherent advantage? Not necessarily, but it still changes the playfield a little bit, which makes the experience rather engaging.
/p>

There are a lot of great features and symbols about Breakaway Deluxe that you would want to know about. Let’s first give you the rundown of what you can expect to find here, and then go into a little more detail. So, with this in mind, there are all sorts of cool things to be explored, including:

In honesty, have you seen another game to offer so many various features to its name recently? Let’s elaborate a little on each specific feature. “Rolling reels” are there to help you win consecutive wins without spending any pennies of your own pocket. You basically spin the reels once and every win rewards you an extra spin – no need to pay anything extra.

With “Smashing wilds”, you will definitely want to get the hockey player all lined up, as they will trigger this little neat feature which will guarantee you permanent wilds once the symbol appears on reels 2,3 or 4. That’s a bargain!

“Free spins” you probably know by now. Here’s the deal – if you get 3 or more Scatter symbols, you will end up with 12 free spins, which is a lot! But that’s not where the good stuff starts. The best thing about the free spins is the “Multiplier trail” whereby you will get your winnings multiplied for each consecutive win in the free spins levels. Wilds can also stack and with each win, you will get +1 Wild symbol added, known as the “Growing wilds” feature.

So far as RTPs go, you will find Breakaway to be well above the industry’s average. Microgaming has decided to take on the competition in a fantastic way, offering 96.88% and setting a new industry average standard with their product. The game also offers medium volatility which balances between the frequency of winnings and their size. So far as bonus games go, there aren’t any such, but the features that are already available in the game are a reward in their own right.

Breakaway Deluxe can very well be one of the slots that will define the next years in slot making. Not many developers these days adorn their titles with as many cool and profitable features as does Microgaming. This is not surprising in the case of Microgaming, though, as the studio is always looking to raise the bar for its competitors and introduce players to even better-paying games. Looking for an awesome new title to play this summer? Choose Breakaway Deluxe!